I’m in a band (sort of). And being in the band has been a helpful reminder of some crucial elements for team success.

My band is really just a bunch of neighbors goofing around for a few laughs and playing once in awhile at gatherings.

This informal group is like a team. And it does make an important lesson clear.

You might find this lesson helpful to your teams, which is why I’m sharing it here.

In any group of people, energy flows in different directions depending on how those people are feeling.

If you pay attention to this, one thing becomes pretty clear. Agreement tends to build energy and excitement, while disagreement curbs it.

I call this the Yes/No Effect.

The more heads are nodding up and down, the more energy builds.

Say someone in the band suggests a certain song for the band to try. If others support that suggestion, positive energy builds. We give it a try, and even if it doesn’t work out so well, we laugh it off and keep building energy.

If new song (or other) ideas are shut down too quickly, the energy drains out of the room like air leaving an untied balloon. There’s a pause and a palpable sense of reluctance to suggest the next idea.

This all happens very quickly. It’s almost imperceptible if you’re not watching for it.

As a team leader, though, you should be watching for this. Sometimes this should be pretty much your exclusive focus.

Because energy management is crucial to team success and productive meetings.

The second reason is more important. It’s because any sort of creative effort relies on good energy and teamwork. In this setting, this idea of energy management is clear as day.

While it may be a little less obvious in our work lives, the idea is no less crucial.

I learned this a long time ago when I was studying how ideas from improv comedy can be applied to the workplace.

One simple rule that helps to make that form of creative collaboration work is that you always support and build on whatever just happened.

To follow this rule, you take whatever someone else offers up for an idea, agree with it, and add your own idea to it.

You never disagree or try to evaluate or critique the idea, because that just drains the energy instead.

Imagine an improv troupe where one cast member says, “Let’s go get ice cream” and another cast members says, “No, I don’t want any ice cream.”

Whatever skit they may have been building comes to a screeching halt. They now would have to figure out how to regroup and get things moving again in some other direction.

What you will see instead, is that the response is always agreement and building on the idea. It would be more like, “Yes! Ice cream sounds great. And then we can go to a ball game!”

They call this the “Yes, and” rule. Agree and build. Never no and never “yes, but” because that’s just another way to say no.

It may not always make sense to run meetings in “yes, and” mode, but I think it always makes sense to pay careful attention to energy flow in meetings.

Sometimes you may even want to manage this explicitly with the team. A good example is brainstorming. Ideation needs lots of yes energy to build so that ideas keep flowing. They can be evaluated later on.

“No” energy has its place, but it usually is not the one that is in short supply. It’s the default response for too many people in too many situations.

Better to try and turn that around and inject more “yes” when you can. 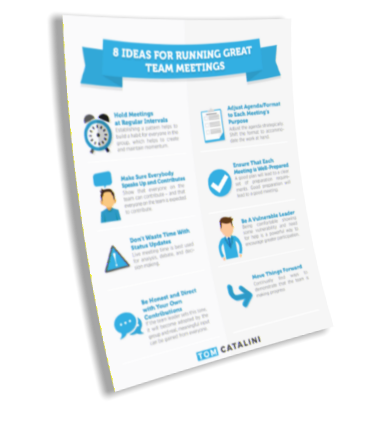